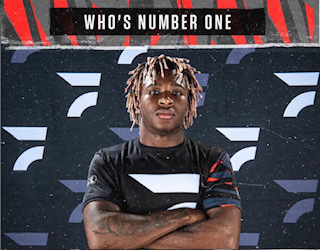 RTHS Senior Nasir Bailey Becomes No. 1 Wrestler in the Nation!

Rich Township High School is proud to announce that one of its very own has gained the title of “ #1 Wrestler In the Nation.” This past weekend Nasir Bailey took part in Flo Wrestling's "Who's Number One” match. This event is a special national competition where the top two ranked high school wrestlers at several weight classes are invited out to compete. The notable competition gives athletes the right to be considered the best in the nation. Over the last several months, Nasir has been training hard with Raptors assistant coach Mark Duda and Coach Ron in preparation for this event and this upcoming season.

On Friday night, Nasir wrestled against Ryder Block (IA), who had the #1 ranking. Nasir was tremendously intentional in proving to his family, supporters, and classmates that he is the top wrestler in the nation. With great precision, Nasir came out and fully controlled the match from start to finish. With exercising great patience, he put his hard work on display to be nationally considered “the best.”

“We all are extremely proud of Nasir's accomplishment and all of the hard work that he displays. He is a great young man who embodies what hard work and dedication can bring. He acts as a role model to the athletes within our program, and he is a great representative of Rich Township. This is a great moment in this young man's life and a great light to shine our praise on,” says Rich Township Head Coach, Alex Pell.

“I’m just super grateful that I have a chance to compete at the national level. None of this would be possible without the support of my coaches, team, and family. I can’t wait to see what this new season in November brings”, says standout wrestler Nasir Bailey